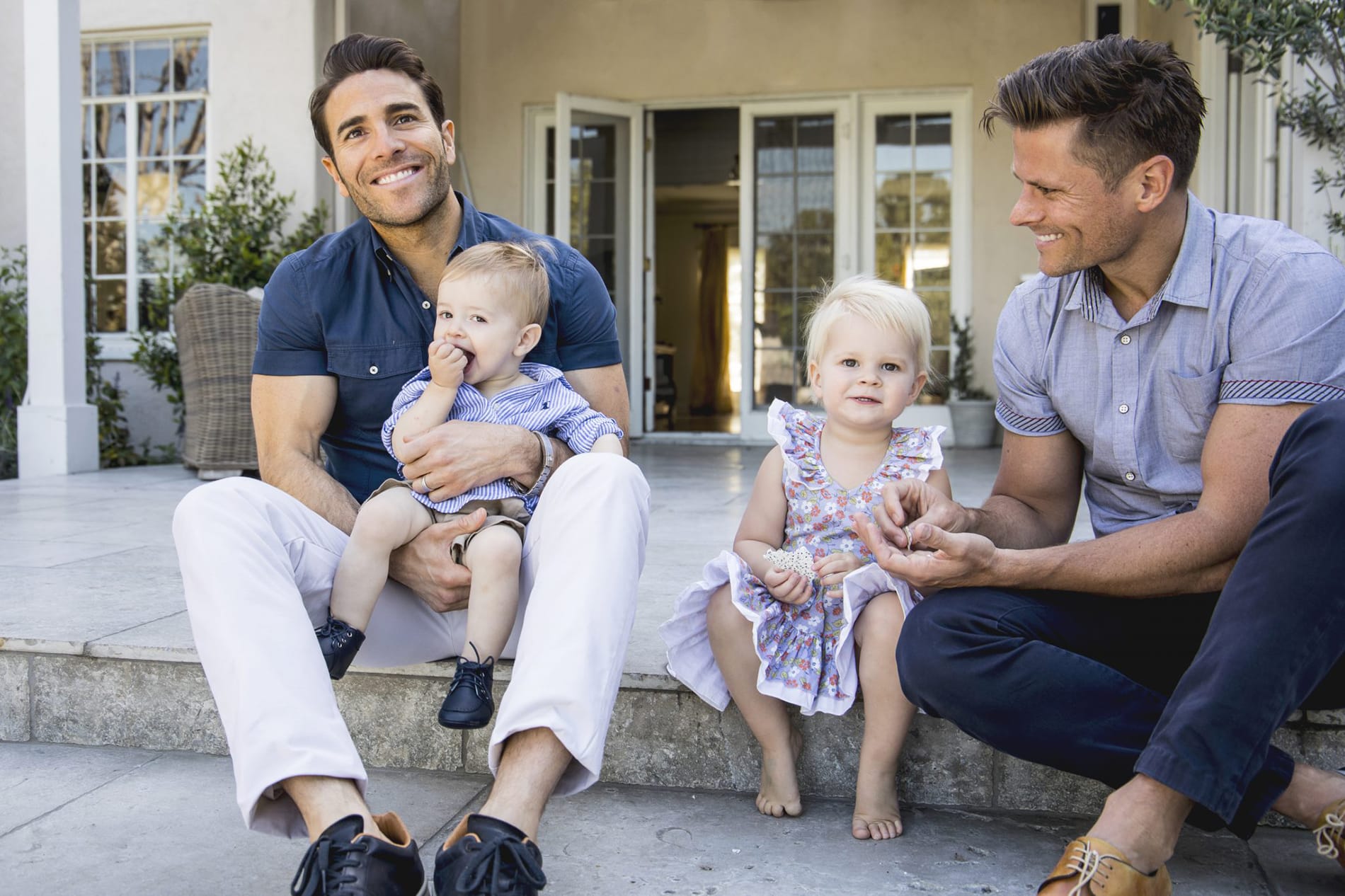 The Gonzollos on Food, Fitness, and Fatherhood

Jon Rollo and Joey Gonzalez – aka the Gonzollos – are the CEOs of two different companies (Greenleaf Gourmet Chopshop and Barry’s Bootcamp). In addition to leading their own companies, they’re also co-owners of the West Hollywood family-friendly hotspot, Au Fudge. Oh, and did we mention they’re papas to two adorable children, 2 1/2-year-old Francesca (aka Frankie) and 1-year-old Jake?! As parents, they make sure that ample time is carved out of their day for quality time cooking as a family, reading books, playing outside, and having a night-time routine together.

Jon became a certified chef at Le Cordon Bleu in Chicago. After managing and cooking for the Rose Bud Group, as well as Patina Group in Chicago and Los Angeles, Jon decided to start his own company. In 2007, Jon opened Greenleaf Gourmet Chopshop, which now has 8 locations throughout California (and a 9th one coming soon!) Greenleaf Gourmet Chopshop is a beautiful embodiment of Jon’s beliefs on wellness and healthy eating. Something that he instills in his own children every day by engaging them in the kitchen and spending plenty of family time outdoors, including time in their garden.

Joey has always been passionate about fitness, and in 2003 he became a loyal Barry’s Bootcamp client. From there, he made his way up the professional ladder at Barry’s, beginning work as a instructor in 2004, a general manager in 2006, partner in 2009, and CEO beginning in 2015. Needless to say, staying active is an important part of his day-to-day. Now that he’s a proud papa of Frankie and Jake, getting outside and staying active is an integral part of his life as a papa.

We had the opportunity to sit down with Jon and Joey and discuss all things food, fitness, business, and babies.

How did you two meet?

Jon: I took Joey’s class at Barry’s with a friend and literally fell head over heels during class. It was instant. We went on a date a few days later and that was it!

Joey: I broke all rules as he was the first and last client I ever dated.

How have your views on love and partnership changed since becoming dads?

Jon: The capacity of love grows exponentially when you have kids. I was amazed at how much my heart burst when I held our babies at first, but even more so with how it continues to grow. That was about the same moment I realized my spouse is a superhero because of how challenging the balancing act of parenting is! It’s near impossible to manage it all, but with communication and teamwork, we find time for us.

Joey: One of the things that bonded us was our work ethic and commitment to our careers. We never had to apologize to one another or justify our ambition. Having kids has forced us to finally prioritize our time together as partners and as a family, and we’ve never felt closer. I have a whole new level of attraction and respect after seeing Jon as a dad. The love we feel for our children is overwhelming and can not be compared to anything else in life.

What do your little ones think you do for work?

Jon: As CEO’s and entrepreneurs, we have involved our kids in our work from day one. We love what we do and we want to make sure our kids are excited about “work”. We want them to understand that work can be fun and fulfilling, so we bring them to work all the time.

Joey: Francesca watched me teach in Venice every Saturday morning. She loves the red room, the music, my microphone, and the delicious Fuel Bar shakes. And every time we put on our workout gear, she screams “BARRYS BOOTCAMP!” She’s also made several visits to my office, which is much less entertaining.

If you were given a few more hours in the day, how would you spend them? (besides sleeping)

Jon: If there were such a thing, I would read more; the newspaper, books, etc. That’s something that I’ve let slip to the side as I’ve become more busy.

Joey: I’d spend time communicating with the people I love. I have so many incredible friends and family and never get enough time to connect with them.

It’s a Friday night and you’re out for dinner – what are you sipping on?

It’s a Saturday morning at the Gonzollo household – what are you cooking up for breakfast?

Jon: We LOVE cooking together – in the mornings, the kids eat eggs (Frankie likes to scramble them herself), yogurt (low or no sugar), berries, and waffles. Joey and I are probably making ourselves a Bulletproof coffee. Or a healthy scramble.

Joey: I love making French toast for the kids because it involved their favorite things: eggs and carbs. Jon nailed it with Bulletproof coffee.

What’s your favorite activity to do with your babes?

Jon: We love playing with them in the backyard, showing them things (snails, dirt, plants, animals, etc), and swimming.

Joey: Love taking them to classes at Au Fudge Camp and to ride the ponies and train at Griffith Park.

What would your autobiography be called?